I was looking for something to make with a leftover half pot of Greek yoghurt and came up with a recipe for roasted cucumber tzatziki which intrigued me, mostly as I've never tried roasting cucumber before. It was really good, roasting the cucumbers gave a different flavour to the tzatziki.

I served it with some a harissa rubbed lamb steak, rice with beans and some rocket. It made a lovely evening meal. 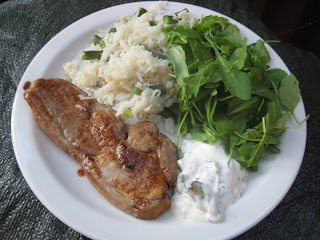 Preheat the oven to 200C. Toss the sliced cucumber with the oil; season and spread out in a single layer on a large lined baking tray. Roast for 15-20 mins until just turning golden at the edges, set aside to cool.

Mix the yoghurt with 2 tbsp water to loosen it. Stir in the remaining ingredients, then toss with the roasted cucumber, season and serve.