This was a meal designed to use up leftovers. I had one egg white leftover from making burgers the other day and I was desperately trying to think of something to do with it. Make a meringue was my first thought but to go to all that effort for one meringue?! I then remembered someone saying to me that they enjoyed egg white omelettes, so I thought I'd compromise and make a one egg, one egg white frittata and have it for breakfast for a couple of days.

The recipe also used up the end of a block of feta, the rest of a bag of watercress, and half an onion that I had sitting around in the fridge which had been bought for some other purpose but that needed using. In that way making it a frugal breakfast, or in fact a dish that could be enjoyed at any time of day! I'm adding it to this months Credit Crunch Munch, set up by Helen of Fuss Free Flavours and Camilla at Fab Food 4 All. 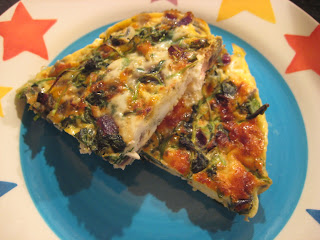 Line a small square baking dish with some parchment paper and add the feta cheese.

In a frying pan over a medium high heat, heat the oil, add the onions and fry until golden. Add the watercress and stir until wilted.

When the watercress is wilted add it with the onion to the feta cheese in the tray.

Put the eggs in a bowl, and beat with a little black pepper. Pour over the top off the feta watercress mixture.