One of my favourite things to eat in the US is the large salad bowls. I was introduced to them by my sister in New York and had one in DC and one in Boston. The one I had in DC was much better than the one in Boston. In Washington I went to Chop't. I just chose one of their salad's rather than making one up of my own. I had the south beach shrimp salad which was really good. So far as I can remember it had shrimp, tomato, romaine lettuce, avocado, heart of palm and a couple of other things in it, with a sherry cucumber vinaigrette and it was so tasty. 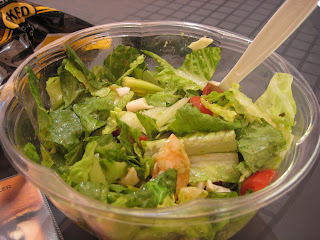 Now I couldn't take a trip to DC without going to Julia Child's kitchen at the Smithsonian. Every since watching Julie and Julia, I have wanted to see her kitchen, and the exhibit at the Smithsonian was really good. It isn't just the kitchen, there is a whole display about her, with interviews and some of her TV shows as well as information about her life and her cooking. It was fascinating to see her actual kitchen which had been moved lock, stock and barrel from Cambridge to the Smithsonian. 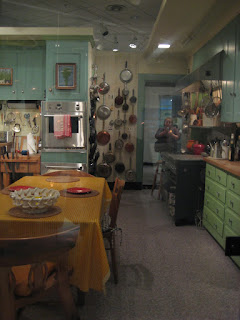 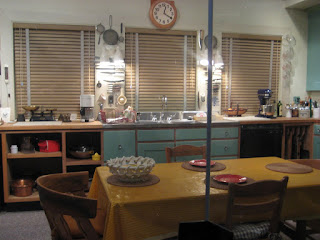 I have now been in the States for about two weeks. It wasn't meant to be that long but I got caught by the Volcano and stranded in Boston. I have mostly been eating fast food, as its much easier to dine by yourself like that. God bless America's food courts as one of my friends said. I see food as a social thing, so going out for a meal means with friends or family, I really don't like eating by myself, even with a book. Having said that I have been to a couple of Cafes/Restaurants by myself. One of these was the Cafe at Kramer books in Washington DC, which is a large independent bookstore just of Dupont Circle. I had lunch out in the sunshine as temperatures in DC were about 25C that day! 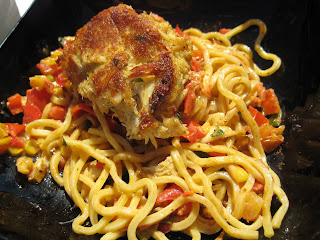 Cafe Crab Cake Pasta from Kramerbooks Cafe and Grill, Washington DC. This was a crab cake on top of noodles with corn, tomato, pepper and spring onion with an Old Bay cream. It was delicious.
Posted by Nicola at 17:03:00 1 comment:

The 2010 April Daring Cooks challenge was hosted by Wolf of Wolf’s Den. She chose to challenge Daring Cooks to make Brunswick Stew. Wolf chose recipes for her challenge from The Lee Bros. Southern Cookbook by Matt Lee and Ted Lee, and from the Callaway, Virginia Ruritan Club.

I loved this challenge, and I had most of the ingredients already in my cupboards and freezer. I used rabbit and chicken as my meats. The only thing I left out was the tomatoes right at the end as I cooked this for my family and my Mum can't eat tomatoes. I also left the bacon and the chilli in as I couldn't find the chilli to take it out! This was an amazingly tasty stew. I made way too much and froze the leftovers, and it tastes even better when its been left for a bit. 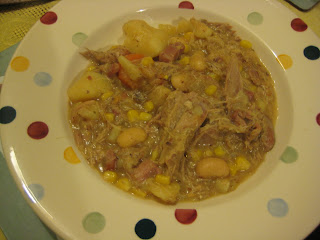 Recipe One, the Long Way

In the largest stockpot you have, which is hopefully larger than the 5 qt ones I have, preferably a 10-12 qt or even a Dutch Oven if you’re lucky enough to have one, fry the bacon over medium-high heat until it just starts to crisp. Transfer to a large bowl, and set aside. Reserve most of the bacon fat in your pan, and with the pan on the burner, add in the chiles. Toast the chiles until they just start to smell good, or make your nose tingle, about a minute tops. Remove to bowl with the bacon.

Season liberally both sides of the rabbit and chicken pieces with sea salt and pepper. Place the rabbit pieces in the pot and sear off all sides possible. You just want to brown them, not cook them completely. Remove to bowl with bacon and chiles, add more bacon fat if needed, or olive oil, or other oil of your choice, then add in chicken pieces, again, browning all sides nicely. Remember not to crowd your pieces, especially if you have a narrow bottomed pot. Put the chicken in the bowl with the bacon, chiles and rabbit. Set it aside.

Add 2 cups of your chicken broth or stock, if you prefer, to the pan and basically deglaze the pan, making sure to get all the goodness cooked onto the bottom. The stock will become a nice rich dark color and start smelling good. Bring it up to a boil and let it boil away until reduced by at least half. Add your remaining stock, the bay leaves, celery, potatoes, chicken, rabbit, bacon, chiles and any liquid that may have gathered at the bottom of the bowl they were resting in. Bring the pot back up to a low boil/high simmer, over medium/high heat. Reduce heat to low and cover, remember to stir every 15 minutes, give or take, to thoroughly meld the flavors. Simmer, on low, for approximately 1 ½ hours. Supposedly, the stock may become a yellow tinge with pieces of chicken or rabbit floating up, the celery will be very limp, as will the chiles. Taste the stock, according to the recipe, it “should taste like the best chicken soup you’ve ever had”. 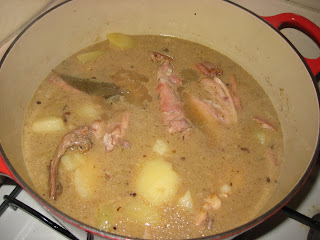 With a pair of tongs, remove the chicken and rabbit pieces to a colander over the bowl you used earlier. Be careful, as by this time, the meats will be very tender and may start falling apart. Remove the bay leaf, celery, chiles, bacon and discard.5 After you’ve allowed the meat to cool enough to handle, carefully remove all the meat from the bones, shredding it as you go. Return the meat to the pot, throwing away the bones. Add in your carrots, and stir gently, allowing it to come back to a slow simmer. Simmer gently, uncovered, for at least 25 minutes, or until the carrots have started to soften.

Add in your onion, butterbeans, corn and tomatoes. As you add the tomatoes, crush them up, be careful not to pull a me, and squirt juice straight up into the air, requiring cleaning of the entire stove. Simmer for another 30 minutes, stirring every so often until the stew has reduced slightly, and onions, corn and butterbeans are tender. Remove from heat and add in vinegar, lemon juice, stir to blend in well. Season to taste with sea salt, pepper, and Tabasco sauce if desired. 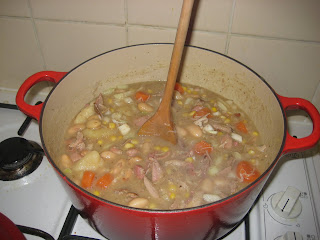 You can either serve immediately or refrigerate for 24 hours, which makes the flavors meld more and makes the overall stew even better. Serve hot, either on its own, or with a side of corn bread, over steamed white rice, with any braised greens as a side.

I served it with bread and it was a real hit. 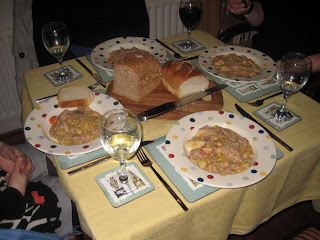