So I've been eating out a fair bit recently. My first was trip to Golden Union for fish and chips, I had Rock Fish and Chips but actually I didn't much like it. The fish was mushy and the chips were not lovely and soft in the middle. 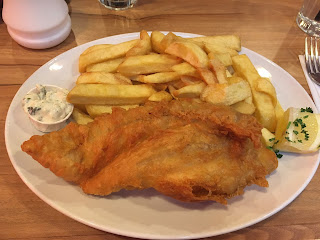 I then went to a Cheese Festival with some friends in Camden. I had some Halloumi Fries from Oli Baba's and then Spinach Mac and Cheese from Mac to the Future. Both were absolutely delicious. I had a huge craving for Mac and Cheese and this definitely hit the spot. 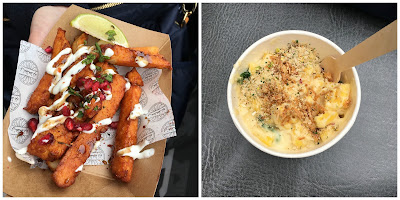 I then went to Kati Roll Company, I had an Unda Aloo Roll, which was very good. Although they managed to give my vegetarian friend a chicken roll rather than a veggie one and they weren't exactly apologetic about it. 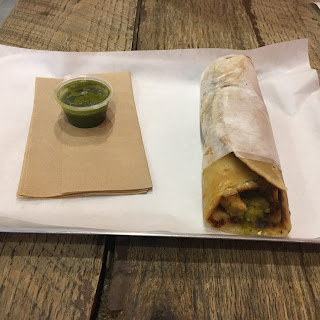 After that we went to Bubblewrap. I had Vanilla Ice Cream, Strawberries, Oreo Pieces and Salted Caramel Sauce. This was seriously one of the best things I've eaten in a long time! Yum! 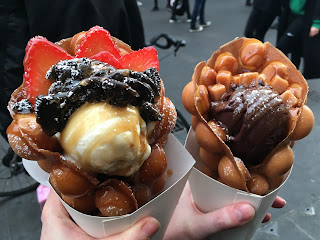 Then I met a friend at Dirty Bones. We both had The Mac Daddy - burger, pulled short rib, mac and cheese, burnt onions and barbecue sauce with Skinny Fries. It was so so so good. I can't remember what the cocktail was but that was yummy too. I also had a Peanut Butter Cookie Cup for afters and that was really good.

Then I went to Made in Italy. Three of us ordered pizza and it came as one giant long pizza. It was very cool! My section had Mozzarella, Wild Broccoli, Fennel Sausage and Chilli. Followed by Ferrero Roche Cake. The pizza was scrummy and the cake was ok. 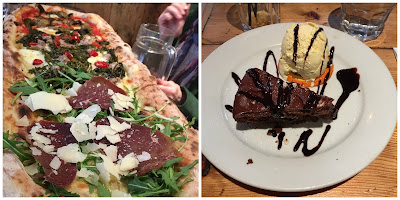 I met my Mum and Sister at Shoryu. I had the Kotteri Hakata Tonkotsu Ramen and then we had Tempura Prawns and Fried and Grilled Aubergine. The broth was very meaty and tasty. Not as good as Bone Daddies but pretty good. 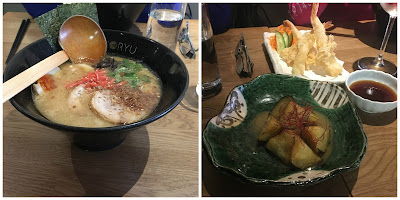 Just before I went on holiday I had a takeaway from Brioche Burger. I had the Oh My Cod Burger and Monkey Fries, both were yummy and I will definitely try them again. 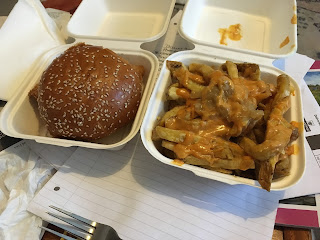