This is a delicious salad that pretty much gets on with itself. there's very little active cooking time involved which made it perfect to make when I got back from WeightWatchers last week and was rushing around. I used goat's cheese and the flavour combination worked perfectly. The recipe, which I have adapted, used farro but as I can't find that anywhere, I used Bulgar wheat instead. It comes from Closet Cooking, a blog which I have been reading forever and absolutely love, Kevin tries out some really interesting combinations of food and celebrated his 6 year blog anniversary yesterday.

I would never have thought of roasting the mushrooms or the green beans but it was delicious and I have now found a new way to cook both! I ate this cold as a packed lunch but it would be just as delicious warm. 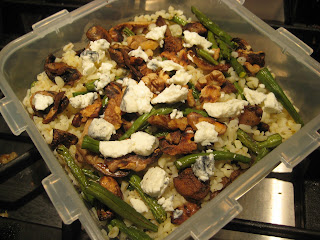 Spray the mushrooms and green beans with the cooking spray and then toss them with the thyme, salt and pepper and place them on a baking sheet in a single layer.

Roast the mushrooms and green beans in a preheated 200C oven until they start to caramelise, about 20 minutes, turning them over about half way through.
Mix everything together and pack into a lunch box. Mix the ingredients for the balsamic vinaigrette together and pack separately, pour over when you come to eat it.
Posted by Nicola at 03:40:00